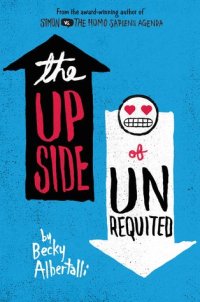 Seventeen-year-old Molly Peskin-Suso knows all about unrequited love—she’s lived through it twenty-six times. She crushes hard and crushes often, but always in secret. Because no matter how many times her twin sister, Cassie, tells her to woman up, Molly can’t stomach the idea of rejection. So she’s careful. Fat girls always have to be careful.

Then a cute new girl enters Cassie’s orbit, and for the first time ever, Molly’s cynical twin is a lovesick mess. Meanwhile, Molly’s totally not dying of loneliness—except for the part where she is. Luckily, Cassie’s new girlfriend comes with a cute hipster-boy sidekick. Will is funny and flirtatious and just might be perfect crush material. Maybe more than crush material. And if Molly can win him over, she’ll get her first kiss and she’ll get her twin back.

There’s only one problem: Molly’s coworker Reid. He’s an awkward Tolkien superfan with a season pass to the Ren Faire, and there’s absolutely no way Molly could fall for him. Right?

I’m set on picking up these hyped books recently, aren’t I? Either way, it’s treating me well!

This book was just a delight to read from beginning to end. It definitely has Simon vs the Homo Sapiens Agenda vibes, with one of my favourite characters making an appearance – Abby Suuuusoooo

But Molly is just as brilliant. I loved her as a main character, where usually girls like her (fat and socially awkward) are the side characters. I can’t speak for the fat representation but as far as I’ve read, people who identify as fat have loved it.

Speaking of representation, that might be one of the most amazing aspects of his book. We have all kinds of rep, including pansexual, lesbian, sperm-donor babies, Jewish characters, interracial relationships, and POC, all of which is done so effortlessly and flawlessly integrated that it just seemed natural and not just slotted in for brownie points.

I really related to Molly, not in the sense of wanting a partner, but in the sense of being left behind. It’s something I’ve been struggling to come to terms with for a while and something I’m sure every teenager goes through at some point, as everyone seems to be going faster than you, doing things you don’t feel comfortable with, seems to be happier than you are. Becky Albertalli really encapsulated that feeling. I think without that aspect and if it was just about Molly trying to find a boyfriend, I wouldn’t have enjoyed this book half as much.

As for the other characters, Reid is a beautiful human being. From the moment Molly saw him with a Lord of the Rings shirt on I was sold. I’m not sure I’ve mentioned on here yet but I adore Lord of the Rings. It was a huge part of my childhood and still is a huge part of my family so if a person in a book is wearing a Middle Earth shirt, they are automatically a favourite. Aside from his geekiness, his personality is just adorable. I feel like him and Simon would get along really well.

And because you probably know I’m a sucker for this, we have another amazing YA family!! Both Molly’s moms were A**, Cassie’s flaws made her realistic, and their dynamic as a family unit was perfect.

I will say I didn’t enjoy this one as much as Simon Vs (review here), but a 4.5 out of 5 is still amazing. Again, Becky is a new auto-buy author.

Have you read the Upside of Unrequited? Let me know in the comments and we can chat!

5 thoughts on “The Upside of Unrequited by Becky Albertalli”